Bulkhead removal is becoming an attractive option for many shoreline property owners as awareness spreads of their geological and ecological impacts, and as aging bulkheads come up for replacement. New state guidelines provide alternatives to hard armor.

It’s been nearly half a century since Wolf Bauer, a founding father of mountaineering, skiing, kayaking, and conservation in the Pacific Northwest, turned his sights to Puget Sound’s shores. At the time, popular and professional opinion agreed that the way to preserve shorelines and the things people build along them was the way you’d stop a bullet: with hard armor. That’s what residents and municipalities along the Sound had done for more than a hundred years, encasing almost a third of the shoreline in seawalls, bulkheads, and revetments.

Sometimes, however, hard barriers aren’t the best defense. In 1527, when the imperial army descended on embattled Florence, none other than Michelangelo Buonarroti was enlisted to design the city’s fortifications. (In those days sculptors and painters sometimes doubled as engineers.) Michelangelo faced a special challenge: how to protect a strategic bell tower targeted by the imperial cannon. Instead of adding more brittle stone and timber, he took the soft route: He hung mattresses and wool bales around the tower walls. These absorbed rather than deflected the blows, and the spent cannonballs dropped harmlessly to the ground.

Bauer, who passed away last January at the age of 103, had a similar insight into shoreline processes. Years of paddling Puget Sound’s shoreline—he claimed to have covered all 2,500 miles of it—led him to lament in 1968 that it was “blocked off and cluttered by haphazard, outdated environmental concepts and practices of waterfront tract developers and zoning commissions alike." Rather than preserving beaches, Bauer, an accredited engineer, argued that bulkheads blocked replenishment from upland feeder bluffs and let wave energy bounce off and carry away sand and other sediment.

It was a prescient observation now supported by science, but his findings often collided with the geological establishment and accepted wisdom about the way waves and shorelines were supposed to work. “Wolf taught me, don’t believe what you read, don’t believe the mapping—you’ve got to see the site yourself, in good weather and bad,” says Bellingham-based consulting coastal geologist Jim Johannessen, a protégé of Bauer’s. “Go in winter as well as summer.” Bauer put those observations to work as an advocate for shoreline protection and a consultant in the design and recovery of more than 30 municipal and state beaches, many of them in Seattle.

Finding the existing language of coastal geology inadequate, Bauer coined or imported new terms to describe what he observed, such as geo-hydraulics, accretion beach, and the now-familiar feeder bluff. He and those who followed him often proceeded by trial and error, with inevitable, instructive disappointments. The first beach nourishment Bauer undertook, depositing sand on a pocket beach on Northwest San Juan Island in the 1960s, washed away in just a few years. It turns out coarser gravel tends to hold much better, and adding sand is now only advised on naturally sandy beaches, or to re-use cheap, readily available dredged sand.

Bauer retired in the late 1990s, but his followers continued building upon the large body of practical knowledge he’d accumulated. Their efforts reached fruition in 2014 when the Washington State Aquatic Habitat Guidelines Program, a consortium of six state resource agencies, published the landmark Marine Shoreline Design Guidelines, MSDG for short. “Guidelines” barely hints at the breadth of this 419-page document, written by Johannessen and his firm, Coastal Geologic Services, together with colleagues at another firm and at the state departments of Ecology and Fish and Wildlife. Funding for the document was provided by the EPA’s National Estuary Program.

The MSDG begins with a statement of the problem: the complex shape of Puget Sound, the widespread, ongoing erosion of its coastal bluffs and barrier beaches, and the impacts of the armoring built in an effort to contain erosion along about one-third of its shores. The guidelines then delve into the nitty-gritty of shoreline protection strategies, including dozens of case histories showing how the new guidelines and techniques can be applied.

Increasingly, however, shore planners and designers face a very different challenge: not how to taper and augment more-or-less natural beaches but whether and how to undo old cures that may be worse than the disease.

Bulkhead removal is becoming an attractive option for many shoreline property owners as awareness spreads of their geological and ecological impacts, and as aging bulkheads come up for replacement. “On the other side of their brains they’re thinking, ‘I can spend $80 thousand on a new bulkhead,’” says Johannessen, “‘or I can spend a lot less and do what this guy’s telling me’ [about the benefits of de-armoring].” Before-and-after photos of eight past removal projects, from Orcas Island to Seattle’s Olympic Sculpture Park, make the prospect even more enticing.

By removing bulkheads where they can, property owners are improving shoreline habitat, one piece at a time. Officials from county and nonprofit groups have been offering assistance and finding new ways to connect with property owners. 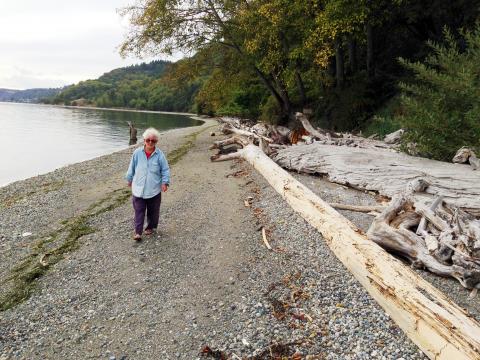 Johannessen warns owners considering removal not to expect miracles. “You don’t want to mislead people,” he explains. “I don’t jump up and down saying, ‘We’re going to make your place erode,’ but I tell them, ‘If a bulkhead’s been in 50 years and you take it out today, there’s a lot of erosion that wants to happen tomorrow. I call it deferred erosion.” The end result will be greater stability and a richer ecosystem—once that catch-up is done.

The dozens of detailed case histories that complete the MSDG may give prospective shoreline restorers a better sense of what to expect. But Hugh Shipman, the Washington Department of Ecology’s Puget Sound geologist and a contributor to the document, warns “it’s not the end-all in design guidance.  The Marine Shoreline Design Guidelines was a great step in the right direction. But no one who does this kind of work can go and follow the guidelines and be done. It’s not intended to be a cookbook.”

At the same time, the MSDG’s analyses and case studies are much more detailed and somewhat more technical than what most shoreline homeowners will want to wade through. “I don’t think the guidelines ever trickled down to the public,” says Theresa Mitchell, who manages the Washington Department of Fish & Wildlife’s Puget Sound Nearshore Ecosystem Project. “It was a technical document for managers and contractors.” Recently, Mitchell led the drafting of an abridged homeowner version, without the case studies, which was released earlier this year. “The idea was to create something more digestible for the general public but with enough technical detail to be useful.”

About the Author:
Eric Scigliano's reporting on social and environmental issues for The Weekly (later Seattle Weekly) won Livingston, Kennedy, American Association for the Advancement of Science, and other honors. He has also written for Harper's, New Scientist, and many other publications. One of his books, Michelangelo's Mountain, was a finalist for the Washington Book Award. His other books include Puget Sound; Love, War, and Circuses (aka Seeing the Elephant); and, with Curtis E. Ebbesmeyer, Flotsametrics. Scigliano also works as a science writer at Washington Sea Grant, a marine science and environmental program based at the University of Washington.
Rethinking shoreline armoring
Salish Sea Currents