Scientists are rethinking floodplain management in Puget Sound. Can we have our farms and salmon too?

Every year, winter rains bring the threat of millions of dollars in property damage, or even the loss of life, from floods. Rivers have historically been channeled and tamed to protect towns and farms in low-lying floodplains, but research shows that this approach may actually be making flooding worse, while at the same time threatening Puget Sound's salmon. At Hansen Creek in the Skagit Valley, scientists say nature is the best engineer.

Hansen Creek is a tributary of the Skagit River that wends roughly seven miles from Lyman Hill in the foothills of the Cascades down to the river. As is the case with many wetland habitats in the Skagit Valley and throughout Puget Sound, the creek has undergone significant transformations. In the 1940s, it was dredged and diked, primarily to protect local farms from the ebb and flow of floods that have been a part of the valley for millennia.

"It's like Mother Nature was saying, 'Lemme out! Lemme out!'"

This held the water back, but cut off from its historic floodplain and then shunted through a series of ditches and culverts, Hansen Creek and the farmers paid a price. The creek had lost its natural, braided character. Salmon that had used it to migrate to and from the sea found themselves restricted to its warm main channel where there was less food and more risk from predators.

It wasn't much better for farmers. Nutrient-rich sediment flowing down the river was no longer allowed to spread out over the plain. It built up in the creek, raising water levels and increasing the risk of flooding. Farmers were left with the prospect of more and more expensive dredging with diminishing returns.

"Each year, an estimated load of 6.5 million tons of sediment is transported by rivers to Puget Sound and its adjacent waters—enough to cover a football field to the height of six Space Needles."

Read: Sediment Load from Major Rivers into Puget Sound and its Adjacent Waters

That started to change in 2007, when the Upper Skagit Indian Tribe led a multi-agency collaboration to restore the upper floodplain portion of the creek on a patch of county-owned land within the Northern State Recreation Area. In stark contrast to levees and dredge buckets, the project planted more than 100,000 native shrubs and trees and installed log structures throughout the site. They enlisted the help of natural engineers like beavers that built dams and lodges, creating new habitat for salmon. Side channels, too, were restored. At the time, it was the largest freshwater floodplain restoration in the United States.

Last May, Lauren Rich, manager of the environmental planning and community development program for the Upper Skagit Tribe, moderated a session on the lessons of Hansen Creek at the Salish Sea Ecosystem Conference. It was a case study of what has come to be known as multi-benefit floodplain management [see sidebar]. The premise: If designed right, projects that help salmon can also help farmers, and vice versa.

The results have been promising. For salmon, studies show that the restored habitat at Hansen Creek is functionally similar to more pristine reference areas: The fish density is the same, the prey base is the same and fish are getting the same quality and amount of food. The new side channels add habitat, and the water temperature has dropped as well, something crucial for salmon. "From the basic goal of creating real estate for the fish to use, the project certainly did that," says Jeff Cordell, a biologist from the University of Washington who led the monitoring. "All of that new plain opened up, and the fish are clearly using it."

But the benefits extended well beyond salmon. "We ended up with greater flood storage capacity," Rich says. The land and the creek could now hold more water without breaching. "This meant less frequent flooding, and shorter flood events [attributable to the creek]," she says, "and that makes the farmers happier."

This last element is key, says Rich. Some farmers worried that the restoration wouldn't do enough to stop flooding that occurred due to the buildup of sediment in the creek. Flooding had become such a problem that landowners formed a flooding sub-district in 1982.

But the restoration work reactivated Hansen Creek's alluvial fan—a geologic feature that removes silt and gravel from the water and spreads it across the landscape, helping to absorb what floods there are. It was so successful that the landowners disbanded the flooding district in 2010. "The county hasn't had to spend any money on flood mitigation since the project went in," says Jeff McGowan, a salmon habitat specialist with Skagit County Public Works. "It was a template for a lot of potential projects on the creek."

Now, four years after the work has finished, Hansen Creek has the manicured scrubbiness of a habitat that has been reset. There are willows and cottonwoods and short pines, blue herons and snipes. "It's a fascinating system, and it responded really quickly," Cordell says. "There are some areas where you can walk along the creek bed and you can't tell that it was a blank field just three years ago."

If there is one thing the project has shown, Rich says, it is the vitality of the site, long held in check. Just after the restoration started, the creek broke free, cutting itself a new, unplanned channel. "We had two weeks from implementation, and then pop! The creek just did what it wanted," she says. "It's like Mother Nature was saying, 'Lemme out! Lemme out!'"

Scientists recognize the importance of floodplains to both humans and the ecosystem. The USGS estimates that valley bottom areas cover about 5% of the Puget Sound basin, but are the site of 30% of highly developed urban areas and 70% of cultivated land. Healthy floodplains are also a key ingredient for salmon health. Studies show that they promote faster salmon growth, and increased productivity, among other benefits.

Now a multi-partner effort funded by the EPA’s National Estuary Program is seeking a win/win for both salmon and humans. Floodplains by Design is managed by The Nature Conservancy, the Puget Sound Partnership and the Washington State Department of Ecology to provide support for projects that promote multibenefit floodplain restoration.

Established in 2013, the program is distributing $33 million dollars to floodplain restoration programs throughout the region, while leveraging already existing local, state and federal funding.

Many floodplains in Puget Sound have been lost through a combination of shoreline armoring, levees and residential, commercial, industrial and agricultural development. 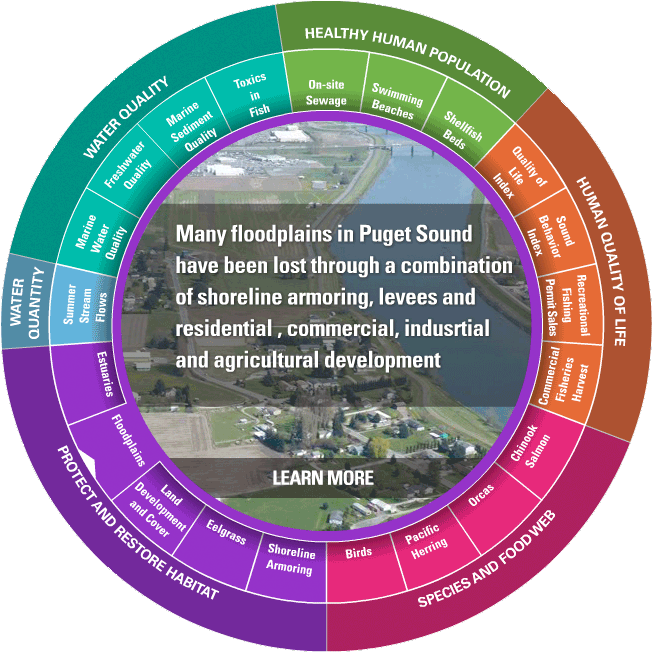 What is Floodplains by Design?