By: David B. Williams

Puget Sound's glaciers are melting rapidly due to climate change. The North Cascades mountains have lost about 56% of their glacial ice while estimates show that glaciers in the Olympics could be gone within the next 50 years. Scientists say salmon and other species could be hard hit as the region loses its “giant storage tank” of ice.

Mt. Rainier National Park visitors in 1915 had the enchanting prospect of buying ice cream in a shack on the road up to Paradise. Located in the Nisqually River valley, the small canvas structure, where one could also purchase lunch and a soft drink, looked to be temporary, perched on a boulder strewn field surrounded by low shrubs. Behind the shack loomed the rubble covered snout of the glacier, a few hundred feet away.

Modern visitors to the National Park no longer have such an opportunity. The stand only existed for a short time and the snout of the Nisqually is nowhere near the present road. In the century plus, the glacier has retreated about 2.4 miles and is no longer even visible from the Park road. A similar story, though without the ice cream treat, could be told about the majority of glaciers in Washington, and around the world. (One small caveat, a new glacier has formed in the erupted cone of Mount St. Helens, since its 1980 eruption.) At Mount Rainer, which has 29 named glaciers including the largest ones in the state, the glacial and perennial ice surface area shrunk by 39 percent from 1896 to 2015. Total area of glacial loss since 1900 of glaciers in the North Cascades (Snoqualmie Pass to Canada) is about 56 percent and several have melted away completely. The situation in the Olympic Mountains is more dire with recent estimates showing that those glaciers will probably be gone by 2060-2070.

Seen most dramatically in the mountains with their retreat, the loss of glacial ice is significantly impacting the uplands but it also plays out throughout the drainage basins down and out to Puget Sound. Changes include increased rates of sedimentation, more variable flow rates, more natural disasters, and warmer river and stream temperatures. Glacial retreat can be traced primarily to a single reason: climate change and the subsequent warming temperatures. “Glaciers are sort of a canary in the coal mine for regional climate change, but they are so much more,” says Jon Riedel, retired National Park Service geologist. “They are not only iconic features, they are also vital features.” And their retreat raises a host of issues affecting plants, animals, and people.   The issues begin right at the glacier. As the ice melts, it makes the landscape around it less stable. (Glaciers do not slide backward; as the glacier melts at its snout, it recedes, or retreats.) No longer supported by the glacier’s walls, rock, sediment, and debris can collapse into the now wide-open valley in front of the glacier, where water gushes forth. Because the water is under pressure at the mouth, it firehoses out, excavating down and creating milky, sediment rich streams.

In the upper part of the stream system, closer to the glacier, silt, sand, and pebbles can create problems for fish by reducing visibility of prey items, filling gaps around rocks, altering fish physiology, and making it harder for females to excavate redds. Fine grained sediments can also inhibit the removal of waste products and prevent eggs from getting enough oxygen, as well as entrap embryos and reduce the amount of sunlight, which lowers photosynthetic activity.

Glacial retreat has been particularly noticeable in recent summers, says Scott Morris, Water Quality Coordinator for the Sauk-Suiattle Indian Tribe. For example, hot, dry weather led to rapid melting and tons of sediment flowing into Chocolate and Dusty Creeks, tributaries of the Suiattle River. “It’s hard to know how the Chinook are responding if you can’t see the redds when the river is chocolate colored.”

Although salmon and other fish evolved with sediment, particularly around Puget Sound, where glaciers have been generating sediment for the past 15,000 plus years, the additional material fomented by glacial retreat makes survival harder in an already challenging environment. But some sediment is good, notes Morris.

At the lower end of the rivers, the long term, glacially influenced landscape evolution requires sediment to create deltas and estuarine habitat. Ironically, climate change is exacerbating the challenges this ecosystem faces, too. With sea level rise, increased erosion rates are damaging estuaries, and without sediments from upstream, this habitat will further suffer. “We are in the process of studying when and where sediment settles because this habitat is critical for juvenile salmon,” says Morris.

Concern about the future of estuaries is further amplified because so many natural deltas in the Sound have been lost due to building dams, which alter river flow and compound sediment; farm and industrial development; and shoreline armoring. A 2011 report found that more than 232 square kilometers, or almost 56 percent of the historic acreage had vanished. The same report documented a decline in tidal wetlands of 301 square kilometers, an area equivalent to 56,603 football fields.

Glacial retreat and their predicted complete disappearance worries Morris for another reason. “Glaciers provide a slow drip of cold water that is essential for salmon.” The ice is a giant storage tank, which year round, and particularly in the summer, melts and feeds rivers with water that is far below ambient temperatures. As Christopher Dunagan has written for this magazine: “Many scientists argue that nothing is more important to a salmon than the temperature of the water. Temperature drives their rate of metabolism and determines how well they utilize food and oxygen, how fast they grow, and whether they have the energy to catch their next meal and avoid predators.”

At present, the region’s glaciers are still able to provide a good quantity of cold water, but that spigot could be misleading or giving a misplaced sense of security because the tap could eventually lose its supply. Researchers predict that by the 2040s to 2050s, many of the region’s glaciers will be too small to contribute the needed water. Coincidentally, rising temperatures will lead to a higher snowline, and hence a smaller snowpack, and less cold, snowmelt water in the rivers.

“The hope among fisheries biologists is cold water refuges,” says Morris. These are areas where ground water, tributaries, and environmental conditions, such as shade and river orientation, lead to more inviting habitat where fish can retreat and find a safe harbor. Morris and others have begun to work not only to better understand how fish take advantage of these refuges but also to identify and preserve their locations. Because salmon restoration cannot be done in a vacuum, he is collaborating on research and field projects with scientists and restoration staff with the Skagit River System Cooperative, which is a natural resource extension of the Sauk-Suiattle Indian Tribe and the Swinomish Indian Tribal Community. A recent area of focus is tree planting along the Skagit River, the most glaciated watershed in the lower 48 states.

Further north, Oliver Grah, water resources program manager for the Nooksack Indian Tribe faces a similar situation. At least 16 named glaciers on Mt. Baker supply the three forks—South, Middle, and North Nooksack rivers. In 2013, Grah and his colleague Jezra Beaulieu published a paper showing that glacial retreat, timing of precipitation, and declining snowpack will adversely affect fish habitat from the mountains to Puget Sound. As the authors have written “the extinction of salmonids from the Nooksack River due to human-caused climate change is unacceptable to the Tribe.”

“There are two buckets to address this issue: mitigation, or working to reduce and offset the impacts of greenhouses gasses; and adaptation, or managing our actions for resiliency and to offset the adverse impacts of continued climate change,” says Grah. “Our approach is to put together a team servicing this issue of climate impacts on fish survival rather than wave our arms without taking some action.” The Tribe has planted trees to provide riparian shade, built logjams for salmon, and collaborated with the Lummi Nation and the City of Bellingham, Whatcom County, and Public Utility District No. 1 to remove a 25-foot-tall dam on the Middle Fork Nooksack River in 2020, which opened up 16 miles of salmon habitat.

Grah is also concerned about commercial forestry in the watershed. Forestry in Washington state has made significant gains in controlling water quality issues via the state’s Forest Practices Act, he says, but the Act essentially does not address streamflow impacts, particularly in late summer, the time period most important to fish survival and most affected by glacial melt. One issue that Grah and collaborative partners have identified is a knowledge gap on the influences of commercial forestry on late summer streamflow. A 2016 study of the west slopes of the Central Cascades in Oregon suggests that commercial forest harvest could reduce flows by as much as 50 percent compared to mature and old growth forests.

It’s unclear how directly the Oregon research transfers to the Nooksack River watershed but recent computer modeling by the Tribe and collaborators suggests that commercial forestry could reduce late summer streamflow by as much as 25 percent in the South Fork Nooksack River. Because commercial forestry compounds the effects of global warming on glacial melting and on water supply for downstream water users, including fish, any effective solution to addressing water issues will need to consider forestry practices and climate change.

Grah is not calling for an end to forestry and knows that it will continue but suggests a different management perspective than that currently practiced. The forest industry cannot by themselves enact change as there is not much incentive for voluntary action. Rather, he says, the regulations that apply to commercial forest harvest on both private and public lands should be updated to address the influences of logging on late summer streamflow, as well as provide opportunities to offset climate change impacts.

Possible actions such as protecting functional mature and old growth stands, extending rotations on areas subject to clear cut, selective harvest, and gap cuts in the snow zone should be considered through regulatory revisions. Such change could address both legacy impacts and climate change and lead to positive impacts on diminishing summer streamflows, declining fish habitat, and the disparity between water supply and water demand in the Nooksack River watershed. “People can’t only focus on the water without thinking about forestry. They have to look at the whole watershed and the cumulative impacts,” says Grah. “The loss of glacial melt makes changes in the watershed even more critical because the only thing we can do is modify how we manage the forests.”

Taking the temperature of salmon 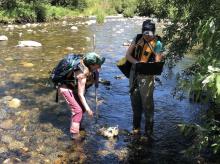 About the author: David B. Williams is an author, naturalist, and tour guide whose book Homewaters: A Human and Natural History of Puget Sound is a deep exploration of the stories of this beautiful waterway. He is also the author of the award-winning book Too High and Too Steep: Reshaping Seattle’s Topography, as well as Seattle Walks: Discovering History and Nature in the City. Williams is a Curatorial Associate at the Burke Museum and writes a free weekly newsletter on Substack, the Street Smart Naturalist.