Researchers are proposing a shift in thinking about how some of the region’s most damaging pollutants enter Puget Sound species like herring, salmon and orcas.

Recent findings about how toxic chemicals creep into the food web, causing harm to species from herring and salmon to killer whales, could strengthen commitments to control pollution pouring into Puget Sound.

Researchers with the Washington Department of Fish and Wildlife (WDFW) and other agencies have been tracking toxic chemicals — including polychlorinated biphenyls (PCBs) — as they move from smaller to larger animals in Puget Sound. In doing so, the researchers confronted a perplexing problem.

Compared to other waterways, Puget Sound seems to have a considerably higher level of PCBs in its living creatures. However, the concentration at the seafloor in its sediments is comparatively low.

Jim West and Sandie O’Neill of WDFW say the difference may lie with the beginning of the food web, where harmful chemicals first enter the waterway. If borne out, their findings could result in a shift in thinking about the biological transfer of contaminants.

PCBs and many other pollutants have properties that make them more like oil than water. They are called “hydrophobic,” meaning repelled by water. Rather than dissolving, these chemicals tend to quickly attach to particles of sediment, dead organic material or tiny organisms, which get swept along in water until they reach Puget Sound. This is part of why PCBs often persist in the environment, and it has led to major Superfund cleanups in Seattle’s Duwamish and Tacoma’s Thea Foss waterways.

A long-standing assumption has been that these particles, along with their PCB hitchhikers, settle to the bottom fairly quickly, polluting the sediments. From there, the chemicals get picked up by invertebrates and other bottom-dwellers. Fish then eat the contaminated organisms or their eggs, moving the contaminants up the food web — or so the old story goes.

But West and his associates found something wrong with this standard picture, based on the concentration of contaminants. Their ideas have been turning this picture upside down.

West suspects that when these toxic-laden particles get into Puget Sound, many never reach the bottom. Instead, the particles get picked up by bacteria or plankton, which are then consumed by higher organisms, including fish.

“A lot of particles in seawater are living things,” West said during a slideshow presentation at the 2016 Salish Sea Ecosystem Conference. “They are very attractive to hydrophobic molecules (such as PCBs).”

In fact, he noted, bacteria are so numerous in Puget Sound that their total surface area may account for up to 80 percent of the biosurface of all living things in the waterway. PCBs are likely to glom onto bacteria before they sink to the bottom. 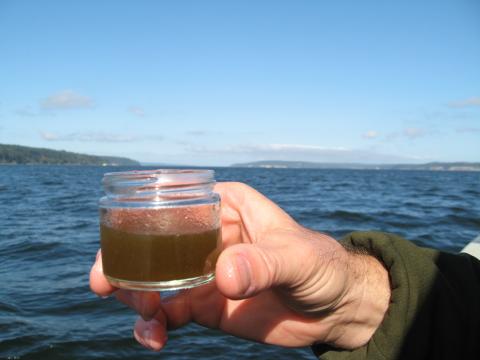 Researchers are studying how persistent pollutants such as PCBs avoid settling to the bottom. Attached to organic material, contaminants can get hung up at the interface between layers of freshwater and seawater, where the water density changes abruptly.

“Once you get PCBs into a bacteria or phytoplankton, they are very reluctant to come out of that matrix,” West said.

Vast numbers of krill, which are tiny shrimplike crustaceans, devour bacteria and plankton that have picked up contaminants along the way. Krill also can break apart clumps of organic material, according to West, who has explored the idea in Seattle’s Elliott Bay.

“The depth of the bay allows for the development of a really robust population of zooplankton,” he said. “Krill hang out at the bottom during the day (to avoid predators), then come up to feed at night. Krill are not only consuming PCB-laden particles, they are also physically breaking up the remaining particles and reducing their sinking rate.”

Smaller particles are more easily swept along in the currents, allowing more tiny animals to nibble on bits of PCB-laced matter.

Sources of contamination in Elliott Bay are not fully understood, but they include stormwater, sewage effluent and industrial discharges along the Seattle waterfront, as well as pollutants washed downstream from the industrialized Duwamish River. Sediments buried on the bottom of the river can be dislodged by strong currents, working their way into the predators and prey living in open waters — the pelagic food web, West said.

Transfer of contaminants through this food web can be complicated. But depth can help explain why a greater percentage of hydrophobic compounds never reach the bottom of Puget Sound, compared to other major waterways. In fact, the average depth of Puget Sound is 205 feet, far exceeding that of Chesapeake Bay (22 feet) and central San Francisco Bay (44 feet). The deepest spot in Puget Sound is about 900 feet, and Elliott Bay reaches 600 feet deep on its outer perimeter.

PCBs, which were banned in the 1970s, break down very slowly. As much as they refuse to dissolve in water, they love to work their way into the lipids, or fat tissue, found in living things. Once PCBs check in, they don’t check out. They remain in fatty tissue, working their way up the food web in higher and higher concentrations, a process known as biomagnification.

Even when PCBs reach the top of the marine food web, where killer whales are the apex predator, their destructive behavior is not over. When animals die, their tissues are broken down by scavengers and bacteria, allowing PCBs to recycle back through the food web again and again. Adding to the overall contamination are historic PCBs still washing off the land along with very low levels allowed in some paints and dyes.

And that can explain why Puget Sound killer whales continue to carry some of the highest burdens of PCBs found anywhere in the world. Together PCBs and other long-lasting compounds found in Puget Sound can alter metabolism, behavior, immune response and reproductive capability of fish, birds and marine mammals — effectively degrading the health of the entire ecosystem.

As with humans exposed to toxic chemicals, the greatest risk to fish comes during their formative stages of development. For salmon, that includes the period when juvenile fish leave the streams and migrate along the shoreline.

Levels of contaminants found in many Puget Sound chinook are high enough to cause serious health problems, including slower growth, reduced immunity to disease and altered hormone levels, according to Andrea Carey, a WDFW researcher who, alongside O’Neill, has studied toxic levels in young chinook salmon.

Juvenile chinook from five river systems were tested for a variety of toxic compounds, including PCBs, often used in electrical devices and building materials; polybrominated diphenyl ethers (PBDEs), used as flame retardants; and DDT, used to control insects. To measure changes as the fish grew, juvenile chinook were collected in three locations at different times: first, just outside their home rivers, then along the marine shoreline and later in open waters of Puget Sound.

As the researchers expected, fish entering Puget Sound from the more urbanized areas experienced higher toxic levels than fish from more rural streams. For example, salmon from the Green/Duwamish River near Seattle and the Snohomish River near Everett picked up more pollutants than those in the Skagit River in northern Puget Sound or the Nisqually in South Puget Sound.

As the chinook continued to grow and accumulate pollutants in offshore areas of Puget Sound, the researchers found that contaminant concentrations in the fish for PCBs, PBDEs and DDT became more and more alike. Levels were below the high concentrations found in fish from urban streams but above the levels of fish from rural streams.

This suggests that pollution is not limited to nearshore areas but is distributed across the prey base throughout the open waters of Puget Sound, Carey said.

Other studies have found that plankton and small schooling fish caught in offshore areas of Puget Sound are indeed contaminated with PCBs and DDT.

The findings may support the notion that pollutants are being dispersed well beyond the urban areas and are still spreading through the pelagic food web.

The levels of pollutants found in juvenile chinook from urban bays and offshore areas were high enough to cause serious problems or even death for the young fish. In total, about one-third of all the fish sampled in Puget Sound had contaminant levels known to cause adverse effects. This bleak picture comes about from an evaluation of a relatively small number of pollutants, compared to thousands of chemicals working their way into Puget Sound, all with their own effects.  In addition, the impacts of multiple chemicals on metabolic, hormonal, immune or reproductive systems are not well understood.

The key to breaking the cycle of toxics in the food web is to locate and shut off the sources of pollution before the dangerous chemicals ever reach Puget Sound, O’Neill said. Typical pathways include stormwater, sewage and industrial discharges, sediments from streams and deposition from air pollution.

Millions of dollars have been invested in the physical structure of streams, such as protecting buffers, restoring floodplains and side channels, and adding woody debris. Recently, extra attention is being paid to streamflows, with efforts to reduce damaging floods in winter as well as dangerous low flows in summer.

But none of it is enough when PCBs and other toxic chemicals remain embedded in the food web, with more pollutants being added all the time, O’Neill said.

“When you look at habitat, it is important to look at all the different attributes,” she said. “We tend to focus on the physical and the hydrological, but we should not ignore the chemical — including the water quality.”

Many of Puget Sound's chinook salmon spend their entire lives in local waters and don't migrate to the open ocean. These fish tend to collect more contaminants in their bodies because of the sound's relatively high levels of pollution.