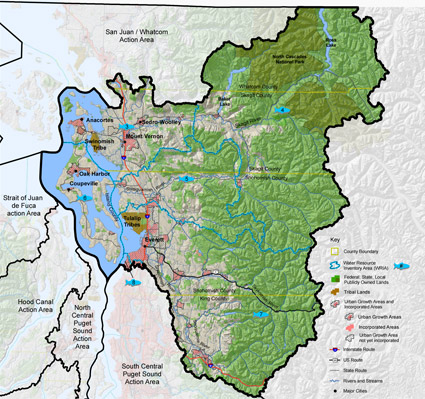 The Whidbey Basin Action Area encompasses two major regions: the Stillaguamish/Snohomish and the Skagit watershed. The Snohomish River travels through some of the best farmland in Western Washington, but only five percent of the watershed is agriculture, while 74 percent is forest land and wilderness. Possession Sound, where the Snohomish River mingles with marine waters, hosts over 300 bird species as well as salmon, otter, and seals. The Stillaguamish, the fifth largest freshwater system in Puget Sound, serves as drainage for 700 square miles in Skagit and Snohomish County. From the Cascade foothills, the two forks of the river meet in Arlington and flow into South Skagit Bay. Forestry and farming are major players in the local economy. The watershed also has low commercial development along the I-5 corridor.

Combined, the Stillaguamish and Snohomish are dominated by forest land, most of it publicly owned and protected from development. On private lands, however, conversion to residential use is still a risk. The Snohomish River basin produces between 25 and 50 percent of the Coho salmon in Puget Sound, and juvenile salmon utilize estuaries and nearshore habitat in Whidbey Basin. Port Susan has been labeled a biodiversity hotspot by the Nature Conservancy, and the Snohomish River delta has some of the largest eelgrass beds in the Sound.

The Skagit is the largest watershed in Puget Sound, beginning in Canada and draining into Skagit Bay. The river delta is ideal for agriculture, and the upper river valley is a major destination for bald eagles in winter. There are 2,989 streams in the glacier-fed Skagit system, which make up roughly 4,540 linear miles. The Skagit’s flow pattern differs seasonally from other rivers in the area. The Cascade, Sauk, and Suiattle rivers, in the upper Skagit watershed, and a total of 158.5 miles of the Upper Skagit River and tributaries, have a Wild and Scenic designation. This has helped the region maintain one of the largest undammed river systems in the Pacific Northwest. The entire population of gray-bellied Brant winters in the Skagit Delta, along with a large percentage of a Trumpeter Swan population.

The Skagit County economy relies mainly on tourism, specialized manufacturing, and international trade, but other sectors contribute as well. Farmland protection programs are working to prevent development, and state and federal parks protect much of the regions wilderness.