The term jellyfish is taxonomically broad, referring to gelatinous plankton in the phyla Ctenophora (comb jellies) and Cnidaria (all other jellyfish). While jellyfish have been components of pristine marine ecosystems for millennia, recent worldwide increases in the abundance of some jellyfish have been associated with anthropogenic perturbations such as eutrophication (Arai 2001), overfishing (Lynam et al. 2006), climate warming (Mills 2001, Lynam et al. 2004, Purcell 2005), and coastal development (Richardson et al. 2009). Because many jellyfish have a complex life history that includes free-living sexual and asexual phases, populations can increase rapidly when environmental conditions change to favor them. 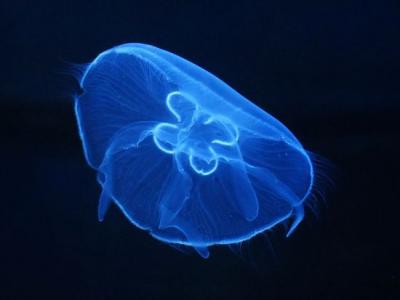 Recent worldwide increases in the abundance of some jellyfish have been associated with human-caused disturbances to the environment such as eutrophication, overfishing and climate warming. 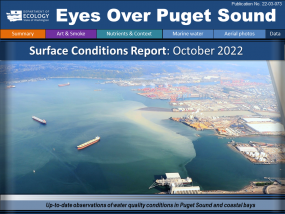 The report comes after a third year of La Nina conditions. Weak upwelling off the coast and low river flows of major rivers meant less cold, nutrient-rich, upwelled water was being entrained into Puget Sound in late summer and fall. Water conditions in Puget Sound in October were generally expected while Willapa Bay and Grays Harbor were both unusually warm and salty. Smoky air restricted our flight to Southern Puget and Central Sound where we saw blooms in terminal bays as well as patches of jellyfish. Sediment in Commencement Bay and along shorelines in Totten Inlet was unusual for a dry fall. A healthy foodweb has at its base a balance of nutrients. Explore what we found over the period of two decades of monitoring. 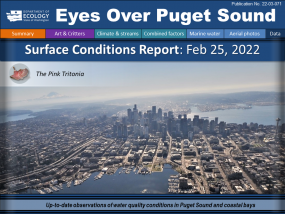 The winter was cold and wet, resulting in a good snowpack in the mountains to sustain river flows into summer. In Puget Sound, saltier waters in summer transitioned to fresher conditions by fall 2021. Water temperatures in late winter 2022 are now colder and oxygen levels are high. From the air, Puget Sound looks spectacular, with few events to report. First signs of the spring bloom were visible in protected bays and passes. Port Susan and Carr Inlet already show sizable patches of drifting organic material. Small jellyfish patches were  present in Eld Inlet. 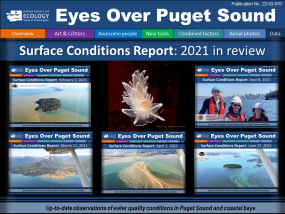 The year 2021 was generally drier and warmer including a heat wave in June. Higher river flows followed a rainy and cloudy fall. In 2021, EOPS aerial images continued to capture the diversity of phenomena on the water, with support from its wonderful contributors who documented visible water quality issues across the larger Puget Sound region. With our Artists Corner and story maps on critters in the mud, we hope to continue to inspire, educate, and motivate our community to keep curious and watchful eyes over the environment. 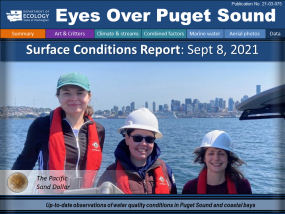 This summer river flows were generally lower than in 2020. And in August, high air temperatures and low precipitation continued, following a drought emergency declaration in mid-July that affected also marine conditions.  The higher-than-normal salinity anomaly which persisted during summer in Puget Sound marine water is, however, eroding away, and lower-than-normal oxygen conditions developed in Central Sound in the month of August. Many blooms and organic material were reported by citizens throughout summer, and by September many colorful blooms in bays across the region continue to be active. Patches of macro-algae and organic debris are still numerous in South and Central Sound and in Padilla Bay. Jellyfish are occurring in unusual places. While we document water quality issues, we are also showcasing the natural beauty of Puget Sound through photography. 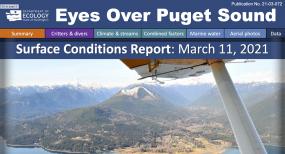 We are in a weakening La Niña, coastal downwelling has lessened and we are getting out of a cold and wet stretch, hurray. In March, rivers have almost returned to normal and carry clear water. It’s a good time to go diving if you don’t mind cold water. The productive season has only started in some places and patches of jellyfish are visible. Have a look at this edition and marvel about the secrets of the dead, or mysterious sediment clouds and the oil sheen spotted near Lummi Bay.

After a relatively warm summer and fall, and La Niña forming in the tropics, stream flows in the Puget Sound region are now relatively normal. Summer in Puget Sound produced lots of algal and organic material in the water and on beaches, which by October have disappeared. Kelp beds look strong in northern Puget Sound and the Straits; and the harvest of the annual chum salmon run is in full swing in Hood Canal. Jellyfish aggregations are visible in Budd and Sinclair Inlets — and some of the jellyfish might conceal a beast of another kind within. Oil sheens on the water are currently numerous. 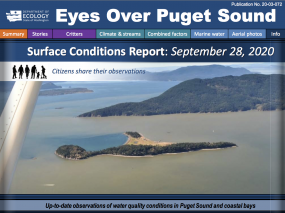 A warm and dry summer ended with a smoky September due to massive wildfires that were followed by strong rain. As a consequence, muddy river plumes in Puget Sound are very visible, especially near the Nooksack River. During summer, many wonderful citizen contributions documented the large formation of organic material in Central Sound and helped us cover the gap in EOPS flight from April-September. By September when we started flying again, a few bays still had red-brown blooms. Nevertheless, schools of fish are abundant, and jellyfish are sparse, which is good news. Meet our new ocean acidification experts. 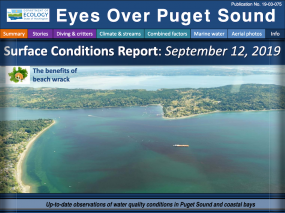 This year, air temperatures were warmer than in previous years, and this pattern is predicted to continue. Precipitation was low and is now improving, yet river flows remain low. By August, Puget Sound surface water temperatures were 0.6 °C warmer across all regions; this could have shifted the timing of optimal temperatures for some marine organisms. In September, blooms are limited to inlets. Jellyfish are abundant in Sinclair Inlet, and anchovies reside in Eld Inlet. Macroalgae are still plentiful. Learn about the benefits of beach wrack and a DNA barcoding project supported by Ecology.

Although fall and winter were warm, February brought cold snowy weather and low river flows. Despite colder air temperatures, the productive season has already started in Hood Canal and Holmes Harbor. Puget Sound waters were warmer than expected through January, and the warmest waters were in Hood Canal, possibly creating a thermal refuge for cold-sensitive species such as anchovies. We saw lots of sea lions feasting on anchovies in Case Inlet, and we may have captured some herring spawning activity. Unusual for mid-winter, we saw jellyfish patches in Eld and Budd inlets. See the new publication about ocean acidification featuring twenty-five years of our marine monitoring data!