Biofilm is a living assemblage consisting primarily of a dense layer of diatoms, as well as organic detritus and sediment. It is held together by the microbes’ sticky cells to form what biologists refer to as a mucilaginous matrix. Biofilm was known to be a food source for benthic invertebrates, as well as a few species of fish, but only recently have scientists begun to understand better just how central a role it plays in the lives of migrating shorebirds. 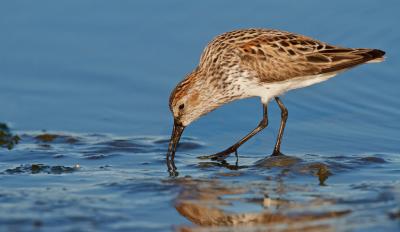 It turns out that a gooey substance known as biofilm is a big deal for Salish Sea shorebirds, providing critical food for some species. But could a proposed port expansion in Vancouver threaten this slimy resource?