•Critter of the Month: articles that give you a peek into the life of the mud-dwelling invertebrates, Puget Sound’s least-known inhabitants.
•Partnerships: articles that describe special projects and collaborations
•Monitoring: articles on the sediment monitoring experience, from the field to the lab
•Reports: articles providing highlights from our most recent summary reports and story maps

The Washington State Department of Ecology’s Marine Sediment Monitoring Program, initiated in 1989, is one component of the Puget Sound Ecosystem Monitoring Program, a collaborative effort dedicated to monitoring environmental conditions in Puget Sound. The Marine Sediment Monitoring Team collects sediments from the bottom of Puget Sound twice a year and tests them to determine their physical, chemical, and biogeochemical characteristics; and to determine the condition of the invertebrate communities that live in them.  They report their findings in agency reports and story maps, and in Eyes Under Puget Sound (EUPS) blog posts. 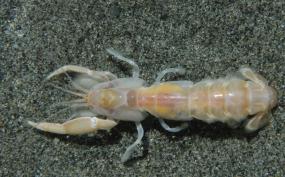 Eyes Under Puget Sound: Critter of the Month - Ghost Shrimp

Fall’s chill is in the air (finally!), leaves are turning colors, and skeletons and spider webs are popping up in yards all over town. Meanwhile, under the mud of Puget Sound, there’s a strange critter that stays in its ethereal costume all year long – the burrowing ghost shrimp. 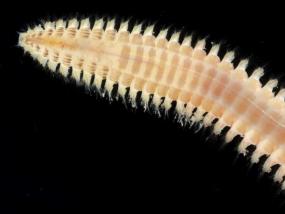 Eyes Under Puget Sound: Critter of the Month - Catworms

With their square heads and antennae that look a bit like pointy ears, it makes sense why the catworms, or marine segmented worms in the family Nephtyidae, would be named after cats. But their antennae are more like a cat’s sensory whiskers than ears, allowing them to feel their way through the mud as they crawl and burrow. Nephtyids are strong diggers, and can even hold their own in the water, rapidly wiggling their smooth, pale bodies in order to swim.

Eyes Under Puget Sound: Critter of the month – the skeleton shrimp

There are more than a half dozen species of skeleton shrimp in Puget Sound. The Washington State Department of Ecology profiles this unusual crustacean in its Eyes Under Puget Sound series. 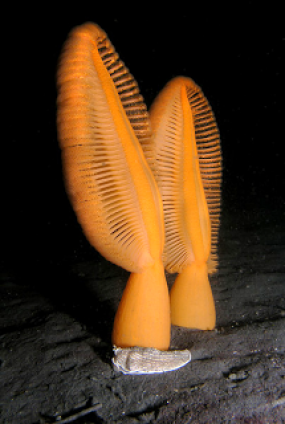 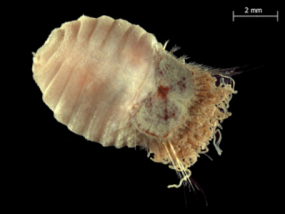 The genus Sternaspis is comprised of sedentary invertebrates with short and thick anterior setae. The dumbbell worm (Sternaspis affinis) can be found on the West Coast of North America, from Alaska to the Gulf of California. 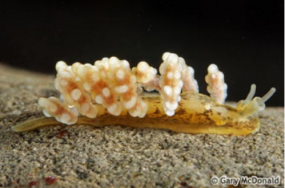 The Doto is a species of sea slug, also known as a nudibranch. It is a marine gastropod in the family Dotidae. This species was first discovered in British Columbia and has been reported as far south as Santa Barbara, California. 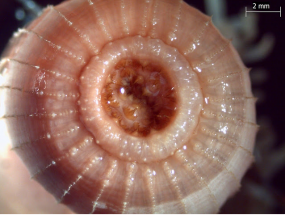 Priapula are a small phylum of small, worm-like animals found in Puget Sound. They occur in most seas, both tropical and polar, at a variety of depths, from shallow coastal waters to as far down as 7,200 meters. 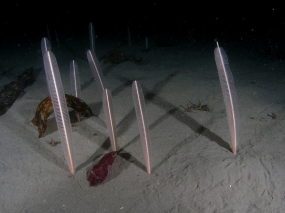 Sea pens are marine cnidarians that belong to the order Pennatulacea. They are colonial organisms, composed of specialized polyps. 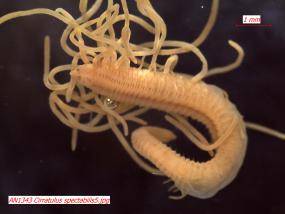 A 2014 Washington State Department of Ecology report provides a taxonomic guide for Puget Sound sediment-dwelling invertebrates (benthos). Surveys of these species are used to monitor the health of the foodweb, as well as levels of toxic contaminants in the seafloor. 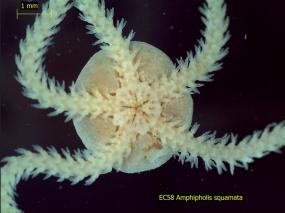 A list of over 1800 benthic infaunal invertebrates is now available on the Encyclopedia of Puget Sound. The list was prepared as part of the Washington State Department of Ecology’s Marine Sediment Monitoring Program (MSMP).  This program, initiated in 1989, is one component of the Puget Sound Ecosystem Monitoring Program, a collaborative effort dedicated to monitoring environmental conditions in Puget Sound.

A Washington State Department of Ecology report establishing benthic indicators for Puget Sound. Benthic macrofauna are known to be good indicators of the status of marine environments, and benthic indices are often used as an assessment tool.