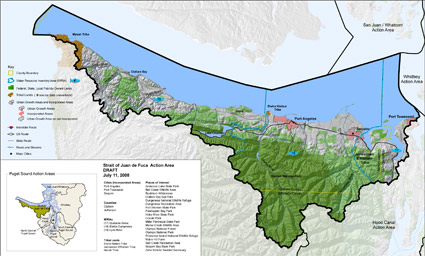 The Strait of Juan de Fuca Action Area includes watersheds from Cape Flattery to the eastern end of the Strait at Point Wilson. Much of Olympic National Park is contained in this action area, as well as the Makah, Lower Elwha Klallam and Jamestown S’Klallam Nations and tribal reservations. The Strait, which connects Puget Sound and the Pacific Ocean, serves as a channel for exchange of salty ocean water and freshwater runoff from rivers emptying into the Sound. Strong tides and ocean currents keep water circulating constantly.

The action area has 217 miles of shoreline, and much of the upper watershed area lies within various parks or forest and timberland. Commercial logging is an important local industry. West of the Elwha watershed, over 75 percent of the land is zoned for commercial forestry. In the Sequim-Dungeness valley, 5,000 acres is devoted to agriculture, and marinas, fishing, and tourism also contribute to the region’s economy.

The Strait serves as a migratory passage for hundreds of marine species, and contains 95 linear miles of floating kelp, 161 miles of non-floating kelp, and 75 miles of eelgrass – the majority of Washington’s coastal kelp beds. These resources provide habitat and food for salmon, birds, marine mammals, and forage fish. Bays and pocket estuaries also support these species.