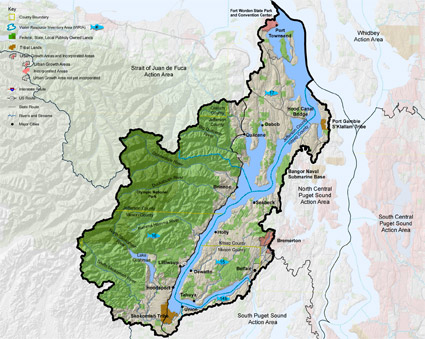 Hood Canal is a natural fjord separating the Olympic and Kitsap peninsulas. It stretches 68 miles from the northern tip of the Kitsap peninsula to Lynch Cove, forming an L shape that remains narrow, only one and a half to two miles across. The Action Area includes the Canal, streams and upland areas draining into it, and all the land north to Point Wilson, in Port Townsend. Major rivers entering Hood Canal from the Olympics, on the west side, include the Skokomish, Dosewallips, and Big Quilcene. Precipitation is variable – Port Townsend receives only 19 inches per year, while 90 inches annually fall at Skokomish.

Water circulation in the Canal is a serious issue. The average depth is only 177 feet, but it reaches a maximum depth of 600 feet, and circulation is poor, especially in the southern portion. Water from the Strait of Juan de Fuca mixes poorly due to an underwater sill south of the Hood Canal Bridge, and freshwater entering the canal often forms a layer at the surface. Algal blooms reduce dissolved oxygen, providing a poor habitat for marine species. However, fisheries and aquaculture are economically important to the region, and the Canal is famous for its oysters and other shellfish species. Many salmon populations, including an evolutionarily significant unit of summer chum, spawn in the streams of Hood Canal and migrate through on their way to other waters.

The Hood Canal region is less developed than other Puget Sound basins, and around 90 percent of the drainage area is forested. The shoreline is the most utilized, with an estimated 33 percent modified by human activity.