Find articles tagged according to regions within the Puget Sound or greater Salish Sea watersheds. This includes the lands from the crests of the Cascade and Olympic mountains to the shores of marine waters extending from the entrance to the Strait of Juan de Fuca east, including the San Juan Islands, and south to Olympia. The marine waters comprise a large, complex estuary that covers an area of\ approximately 2,330 km2, including 4,000 km of shoreline, and is fed by thousands of \ streams and rivers that drain a total land area of about 35,500 km2. On average, Puget Sound south of Admiralty Inlet has a depth of 62.5 m, but ranges to nearly 300 m at its deepest. This depth is the result of relatively recent geologic events, as 10,000 years ago, mile-thick glaciers pushed southward into the basin, carving deep fjords and depositing sediments hundreds of meters thick. 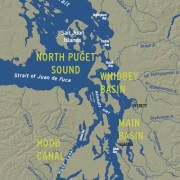