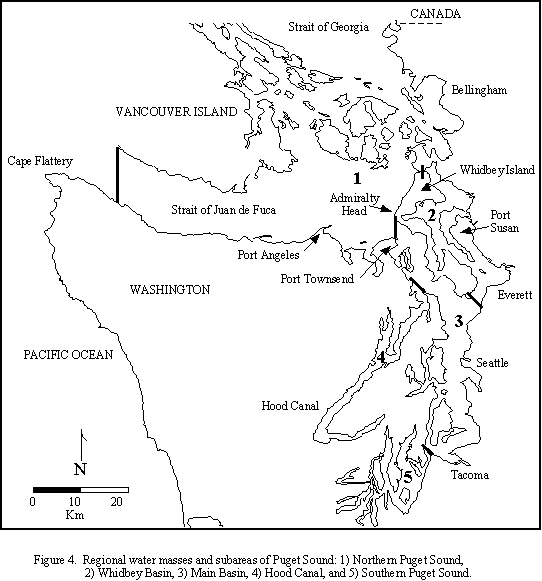 The main basin of Puget Sound runs from the Tacoma Narrows to the waters between Point Wilson, on the Olympic Peninsula, and Whidbey Island.  There are sills at the northern and southern ends, and depths in the central part range from 100 to 140 meters. The five sub-basins within this part of the Sound all reach depths below 150 meters, with the deepest being 290 meters west of Port Madison. The basin includes Elliott Bay and Commencement Bay, which receive fresh water from the Duwamish-Green river system and the Puyallup River, respectively.

The Skagit River provides around 30 percent of the freshwater flow into the main basin, which is stratified in summer but mixes well in winter due to cool temperatures and increased wind. Decadal climate regimes influence the circulation patterns in the basin. During cool periods, the strongest currents flow from the Strait of Juan de Fuca at a medium depth, but when warmer, drier weather dominates, currents tend to be strongest at the bottom of the basin. Dominant vegetation is green algae and eelgrass, but overall vegetation is sparse. Only 8 percent of the shoreline has continuous eelgrass beds, with a patchy distribution over an additional 40 percent.