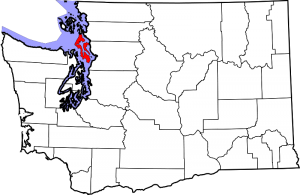 Island County is located in Washington State.  The county is made up of two larger islands, Whidbey and Camano, along with several small islands that occupy the northern portion of Puget Sound.  Island County is bordered on the west by Jefferson County, the northwest by San Juan County, the northeast by Skagit County, the east by Snohomish County, and the south by Kitsap County.  As of the 2010 U.S. Census, Island County had a total land area of 208.45 square miles and a population of 78,506.  Oak Harbor, located on Whidbey Island, is its largest city with a population of 22,075.  Also of interest: