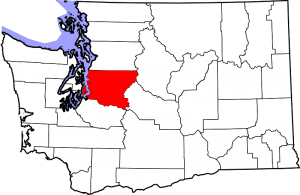 King County is located on Puget Sound in Washington State.  It is bordered on the north by Snohomish County, the northeast by Chelan County, the southeast by Kittitas County, the south by Pierce County and across the Puget Sound on the west by Kitsap County.  As of the 2010 U.S. Census, King County has a total land area of 2,115.57 square miles and a population of 1,931,249.  Seattle is its largest city with a population of 608,660. Also of interest: