Scientists argue that herring managers should take a tip from stock market investors and diversify the population’s “portfolio.”

Even the herring are moving to Seattle.

In 2012, a group of Pacific herring suddenly arrived in Elliott Bay. The new residents found a previously unused stretch of red algae and set up house, laying their eggs and forming what scientists now recognize as a new colony.

It was welcome news for a species that has more typically seen declines in its population. Herring numbers have dropped mysteriously across Puget Sound, so the event in Elliott Bay was watched closely. In one fell swoop, scientists say, the entire herring population of Puget Sound had suddenly become a little healthier. It had “diversified.”

Scientists at the University of Washington compare the event to an expansion of a stock portfolio where a diversity of stocks can bring more stability and more returns. Using 40 years of data from the Washington Department of Fish and Wildlife, Dr. Margaret Siple and her coauthor Dr. Tessa Francis found that Pacific herring (Clupea pallasii) actually diversify their “stocks” naturally in a number of ways.

The authors looked at the biomass of Pacific herring over time at 19 spawning locations in Puget Sound. Writing in the journal Oecologia, they reported that the 19 sites each had widely different numbers of spawning herring — a potential hedge against localized boom and bust cycles in the environment. Such independent variation produces what is known as a “portfolio effect,” a situation similar to a portfolio of stocks in a 401 K. 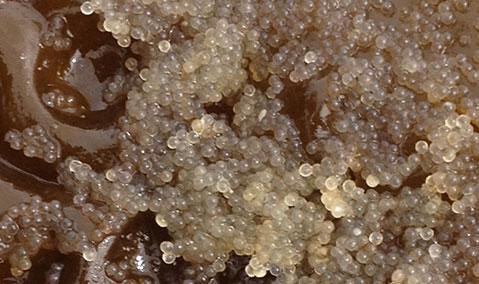 Additional research shows that maintaining a balanced portfolio can also extend to behavior. Pacific herring spawn in Puget Sound from January to June, meaning that stocklets exhibit a wide range in the timing of major events in their lives, such as reproduction, birth, and migration. According to a study presented at the 2018 Salish Sea Ecosystem Conference in Seattle, genetic differences between herring increase with the differences in the timing of their spawning runs.

That may be critical as ocean conditions and habitats change in Puget Sound. “Peak spawn timing is changing for most herring in Puget Sound, and this may be a West Coast-wide phenomenon,” according to Dr. Francis [Editor’s note: Dr. Francis is a research scientist at the Puget Sound Institute, our parent organization, and a topic editor for the Encyclopedia of Puget Sound]. “This could have consequences not just for genetic diversity, but for food web interactions and population dynamics as well.”

As a result, environmental managers say we should do more than just protect known herring habitat and characteristics. They are calling for more room for the herring portfolio to diversify, allowing for habitat to expand and other patterns to shift.

About the Author:
Spencer Showalter is a graduate student at the University of Washington School of Marine and Environmental Affairs.